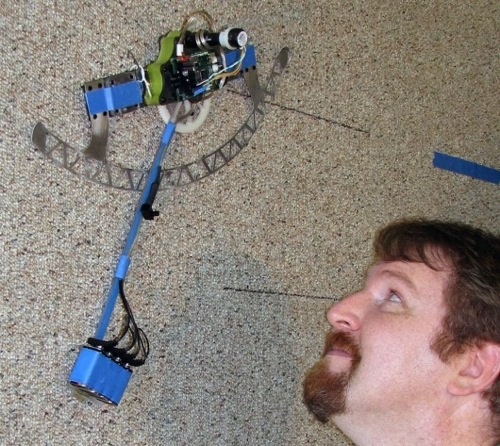 We have covered robots that climb before, two of them on one day, actually. This ROCR from the University of Utah can actually climb walls like a spider. It’s more like a monkey, honestly. Let’s just say it’s like a spider monkey.

I’m not certain what ROCR is an abbreviation for, but I have a video of it after the jump. As you can see, it has a tail that swings like a pendulum with every climb, which apparently holds the batteries.

It can only climb carpeted walls for now, but it goes at a speed of six inches per second. The creators of the ROCR boast of its efficiency to be twenty percent, a number derived by the ratio of work done to energy consumed.

Apparently, the next (and most obvious) step is higher climbing efficiencies and extended battery life. I’m sure there are plans to make certain that certain that it can climb more than just carpeted walls. Soon it will give Spider-man a run for his money.

Of course, I can think of more practical uses for this technology other than cool spider-bots. For example, just think of a window washer on a large skyscraper with one of these things on his back. No more of those cable and scaffolding jobs. I can’t think of anything else for this, but give it time.