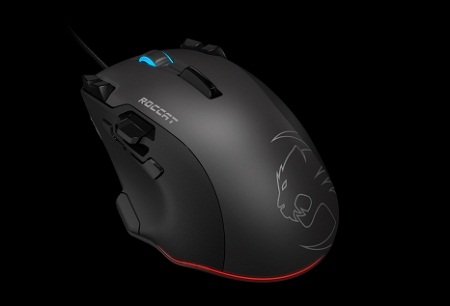 Gamers are an extremely sensitive lot when it comes to the kind of hardware in which they ply their trade. Some would only stick to a particular brand name out of loyalty, while others do not mind making the switch from time to time if they think that a particular model at that moment in time happens to serve their needs nicely. Having said that, ROCCAT, an industry leader and high-water mark for computer game accessory development and design, has taken a step forward in the world of gaming mice with the introduction of the Tyon.

The ROCCAT Tyon will sport a whopping 16 assignable buttons, where it will deliver 31 distinct possible functions, as well as near limitless levels of customization courtesy of ROCCAT’s dedicated Easy-Shift[+] Button. Touted to be a true blue game changer, the ROCCAT Tyon will be able to deliver the needs of an increasingly nonlinear gaming while sporting the most extensive set of streamlined, tested and expertly designed features available in the market.

The ROCCAT Tyon happens to be an efficient, combat-ready weapon that is also aesthetically pleasing to the eyes. It offers the simplest access to the most features in a gaming mouse, hence doing away with the need to perform minor hand adjustments on the keyboard thanks to the ROCCAT X-Celerator and Dorsal Fin, making it exceptionally comfortable with exhaustively tested button placement schemes.

Thanks to ROCCAT’s new X-Celerator and Dorsal Fin technology, those will spell the end of frustration that comes about from being shackled to the myriad of keyboard commands as it makes a shift of major functions from the keyboard to the Tyon. The X-Celerator happens to be a two-way analog stick which would enable gamers to throttle, sprint, rotate tank turrets, and more, straight from their mice. With the Dorsal Fin, it happens to be a two-click button that is located behind the mouse wheel, delivering comfortable mid-finger gaming action and increasing mouse functionality. Sounds like a winning combination to us!