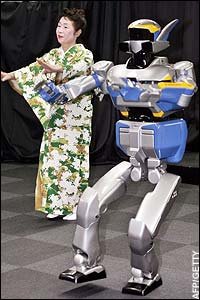 Robots tend to be clumsy, or at least that’s the image that we get. After all, robots that are as agile as Spiderman as portrayed by numerous science fiction shows are but figments of the imagination. Even one of the most famous autonomous robots, Honda’s Asimo, has problems getting around on its own as quickly and as efficiently when compared to a normal human. The Japanese aren’t about to give up just yet though, developing a dancing robot that could eventually replace human dancers on the stage, but not quite yet. These roboticists are making large strides with their invention which is more than capable of imitating a dance routine by studying it, and will definitely guarantee you the uniformity in a team without time-consuming and costly rehearsals.

Shin’ichiro Nakaoka and his colleagues at the University of Tokyo have successfully managed to overcome difficulties where programming these robots are concerned. Their range of robots can now carry out complex leg movements without running the risk of toppling over like a pirate who has had too much run to drink. Known as the HRP-2, these robots utilize software that copies movements of a human dance teacher via the use of video motion capture technology. I wonder how they’ll do with hip hop and rap, as those kinds of dances certainly require a whole lot more flexibility. Just don’t go bustin’ nobody’s cap when dancing, yo!

It is also hoped that these robots will one day be walking tomes of ancient dances, acting as an insurance in case the art of dancing dies out when no one around wants to pick up this form of art. Sounds like a pretty good idea – after all, transferring knowledge into a robot involves uploading the necessary patterns and surely takes much less effort than teaching a human from scratch. Now, if only those pesky humans remember to make backup copies of the dance database lest a virus wipes out all information in a flash.