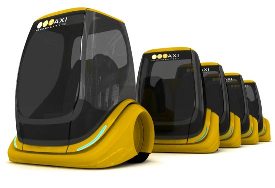 I’m sure all of you remember the movie Total Recall, where Arnold Schwarzenegger rides in a cab that drives itself. It would appear that someone has taken inspiration from science fiction with this Robotic Taxi Service.

It looks a lot like the “Slimos” that we reported on a week ago. Designer Kubik Peter’s automated transport is electrically powered, and can seat about two. That may not sound like much room, but there is a trunk in the back for some luggage.

Now I’m sure you’re wondering: how does the passenger tell the robo-cabbie where to go? I believe the user just makes a selection of cross-streets on a touchscreen controller. I would imagine that the touchscreen would have internet access, so maybe the passenger can watch a little YouTube video while he or she is waiting to get from Point A to Point B.

I’ve noted that the robo-cab looks a little skinny. Perhaps it is prepared for an era where two people can comfortably travel side by side in a lane normally made for one car. Considering that many metropolitan cities have way too many cabs on their streets, they could use an exclusive lane devoted to cabs.

This robo-cab could hearken in an age where a taxi driver is no longer needed. Of course, they could always create the Johnny Cab dummy drivers from the aforementioned Total Recall. Remember that cabbie that could talk and attempt at make conversation with starters like “hell of a day, isn’t it?” Well, if these robo-cabs are ever perfected, I’m certain it will be a “hell of a time”.