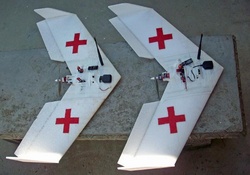 This isn’t the first time that we have reported on Unmanned Aerial Vehicles (UAVs), and most of the time, these are used for spying in enemy territory. It appears that UAVs have medicinal uses as electronic flying couriers.

Think of them as that big G button on Speed Racer’s Mach 5 that fires an electronic homing pigeon. It was used on the cartoon all the time, but only mentioned in the movie. (By the way, the Speed Racer movie is coming out on DVD and Blu-ray tomorrow, and you should invest your money in a film that was incredibly awesome and yet was somehow a box-office flop.)

Sorry for digression, but I thought the Speed Racer reference would give you a good idea what these electronic courier pigeons do. These things can be programmed to carry medical supplies to and fro to places that don’t have advanced hospitals, such as Third World countries.

For example, you can send in a flyer into an area, get a medical sample of the patient, then send it back to a lab for analysis. The flyer can then send back the proper medicine for the case, such as anti-venom for a snakebite.

These flying medical planes can be controlled via GPS, or from the ground for short distances. They can carry about 500 grams, which might be enough to transport life-saving cargo.