This is our first article in our Christmas 2007 Gift Guide, lets get that Christmas shopping done early.

The holidays normally mean lots of joy for kids (or disappointment if they received a paltry Rubik’s Cube instead of that shiny new Wii) and pain for parents, particularly their pockets as they attempt to alleviate their guilt of not spending enough time with the little ones through the year by picking up the latest and greatest toys. I suspect that robot toys this year will really take off, so be prepared to fill up that bank account of yours with a respectable amount of dough before you use your credit card and start shopping. 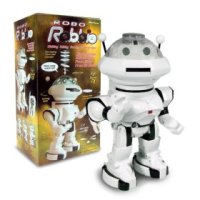 Robo Robbie
Robo Robbie is a simple toy by any means, and you can tell by its price ($39.99) and design. In essence, Robo Robbie is a walking, talking, and dancing robot that shoots harmless foam discs from its mouth as well. It is controlled using an infrared remote control, boasting multi-directional walking options. It requires six AA batteries before coming to life, and is recommended for kids aged 6 and above. Not something I would get for those who are pretty rough on their toys since it looks very fragile. On the upside, at least your heart won’t break when it does.

Check it out on Amazon. 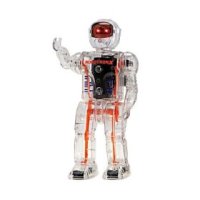 Build Your Own Robot Kit
Build a real working robot that walks, talks and delights for hours of endless fun. This is definitely the toy to get if you have high hopes of living the dream of being an engineer through your 8-year old. The Build Your Own Robot Kit features an easy to assemble motorized robot complete with light and sound, and a tethered remote that enables easy control of your creation. Each $19.95 purchase comes with step-by-step instructions, a screwdriver, and over 40 pieces to construct the robot. It will offer an interesting learning process for you to figure out what moves machines, gears, and motors. Meant for kids who are aged 8 and above only. 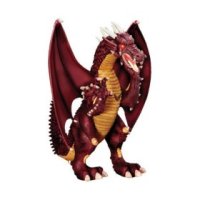 Discovery Remote Control Dragon
If your progeny has a penchant for fantasy, then perhaps this Discovery Remote Control Dragon is your child’s cup of tea. Each $39.95 purchase comes with a uniquely sculpted remote control, a realistic walking motion, fire breathing effects and growl minus the heat, a moving head and screeching roar to scare the pet cat, moving dorsal spikes for a more lifelike appearance, and flapping wings. Powered by half a dozen AA batteries, this toy proves that dragons don’t fly – unless you drop it from a six story building, that is. 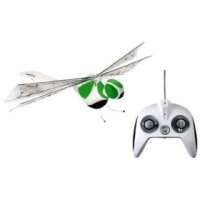 WowWee FlyTech Dragonfly
FlyTech Dragonfly is the world’s first radio-controlled flying insect. With its’ ultra-light, dual-wing design and “high-flex”, crash-resistant structure, the dragonfly is an easy-to-fly aeronautical marvel. Use the dragonfly indoors or outdoors, controlling its speed, direction and height with the 2 channel digital proportional remote. It is powered by half a dozen AA batteries, so I’d recommend you pick up rechargeables in order to save tons of money in the long run. After all, there is no need to add any more cost to the $68.88 asking price, is there? 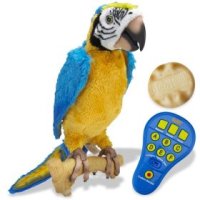 Squawkers McCaw Parrot
Squawkers McCaw is a witty, energetic, and unpredictable talking parrot, capable of interacting in incredibly realistic ways. He works pretty much like a real parrot, but survives on batteries instead of crackers like Polly. A remote control triggers pre-programmed voice commands and provides “shortcut buttons” to activate varied play modes which enable Squawkers McCaw to respond by simply repeating words spoken to him, answering with pre-programmed commands, “teaching” the parrot to respond with programming voice commands or prompts, and responding with “humorous” and “playful” phrases to his pre-programmed phrases. And true to real Macaws, Squawkers McCaw loves to dance! If music isn’t played, Squawkers McCaw will play and dance to his own signature song. For $69.99 a pop, you can’t really go wrong since there is no poop to clean up after.

WowWee Roboreptile
Here’s a pretty nifty product description of the Roboreptile. “The ultimate herpetological species. Don’t be fooled by this beast’s size – he is fast, ferocious, cunning and intelligent. A sly and ruthless creature, Roboreptile uses advanced technology for greater intelligence. He can be programmed with movements and animations and is packed with personality. Roboreptile’s powerful infrared vision and sonic sensors swiftly alert him to disturbances in his environment. In Guard Mode they make him a formidable sentry. In Free Roam his sharp sensory systems make him a ruthless predator. Roboreptile can be extremely hostile or harmless, alert or asleep. He has four moods aggressive, ferocious, passive or tamed. Can be controlled directly, programmed or put into Free Roam, Demo Mode, Guard Mode or Sleep Mode.” While the Roboreptile has been released for over a year already, he still makes a pretty cool buy at $119.99. 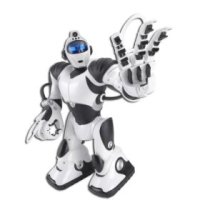 Robosapien V2
Forget the Robosapien – there is a new kid in town from WowWee, and his name is Robosapien V2. Not very imaginative, but at least he gets the job done when it comes to being laden with high tech stuff within. Robosapien V2 is a highly evolved robotic fusion of technology and personality, combining fluid biomechanical motion with a multi-sensory, interactive humanoid personality. This 24” tall, second generation Robosapien is capable of autonomous “free roam” behavior. Features include multiple levels of environmental interaction with humans and objects, sight, sound and touch senses, humanoid body movements (including bending, sitting and standing, lying down and getting up, dancing, waving, martial arts), speech capability (responds verbally to environmental stimuli and to controller commands), a Color Vision System that recognizes colors and skin tones, and a Stereo Sound Detection System that “Hears” and reacts to sounds among others. This is a guaranteed battery guzzler, so rechargeables in the home are a must. To get an idea of the upkeep cost before you buy, how does six D and seven AAA batteries sound to you? Robosapien V2 currently retails for $179.99.

Pleo
Pleo, a one week-old dinosaur, is a robotic marvel and the newest member of your family! Pleo interacts with you – moving organically, expressing emotion, autonomously exploring and responding to the world around him. Each Pleo has a unique personality that develops based on Pleo’s life experiences with you. Pleo’s sophisticated sensory system has devices that enable him to hear, to see, to sense touch, and to detect objects: a color camera, sound sensors, two infrared sensors, 14 motors, over 100 gears, eight touch sensors, and an orientation sensor. A sociable Pleo who’s alone too long or a hungry Pleo who’s not getting fed can turn into a sad Pleo. How can you tell? His droopy tail and forlorn look let you know that he’s looking for a friendly pat or a taste of his favorite leaf. Pleo’s hungry. Getting sleepy. But hey, what’s that over there? Like any creature, Pleo feels hunger and fatigue—offset by powerful urges to explore and be nurtured. He’ll graze, nap, and toddle about on his own—when he feels like it! Pleo can change his mind and his mood, just as you do. Not meant for kids who are under 8. The Pleo can be pre-ordered for $349.99 with a shipping date of December 2007. 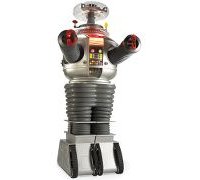 Genuine Lost In Space® B-9™ Robot
The 6 1/2-foot, animatronic remote-controlled version of the B-9™ Environmental Control Robot from the classic Lost In Space® television series which ran from 1965 to 1968 retails for a jaw dropping $24,500.

Every detail of the original robot is faithfully reproduced from original archival molds, patterns and blueprints. It is made from fiberglass, acrylic, aluminum, and steel parts, including its rotating torso and radar head, flashing lights, animated ear sensors, and clawed arms. It can be operated using the included remote control, allowing you to move its torso left and right and activate the robots soil sampler (which comes out of its right tread housing and spins; the robot provides an audible environmental analysis thereafter). The robot has a 240-watt audio system, and speaks 511 pre-recorded phrases performed by Richard Tufeld, the original voice of the robot from the television series (including such familiar phrases as “Danger Will Robinson!”) Pulling the robot’s power pack causes it to utter “Aaghhhhhh…” just as it did in the TV series when being shut-down; plugging it back in prompts it to say “Who turned out the lights?”

I thought when I started working, I would be able to afford all the toys I ever wanted, but I guess the price of toys have outgrown my earning power. Check it out on Hammacher.