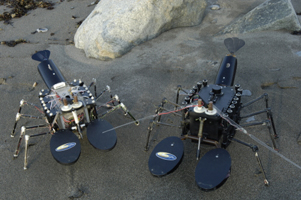 The Robot Lobster dubbed “Robo-Lobster”, was created with the task of detecting mines under water. It has 8 legs, can move around in any direction and weighs 7 lbs. It is built from industrial strength plastic and can sniff around the ocean by using it’s 2 antennas. The claws at the front and tail at the back are used to keep the robot lobster stable in turbulent water.

Building robots is all the rage for some people. They are trying to get them to do what humans cannot, while also trying to build them as human as possible. This lobster to be honest, is a little freaky looking and not something I would want walking my way as it measures 2 feet long. But, considering it’s main priority is to hunt out mines in the ocean surf I am more then happy to let it continue on with that dangerous job.

The lobster robot was created back in 2003 and was part of a military operation to keep harbours and coastlines free of danger. It was designed by Professor Ayers who “reverse engineered” how a lobster acts and walks around the sea floor. Massa Products then had the responsibility of building the robot to mimic how the lobster works. The robot lobster is not available for public though and is for the military only.