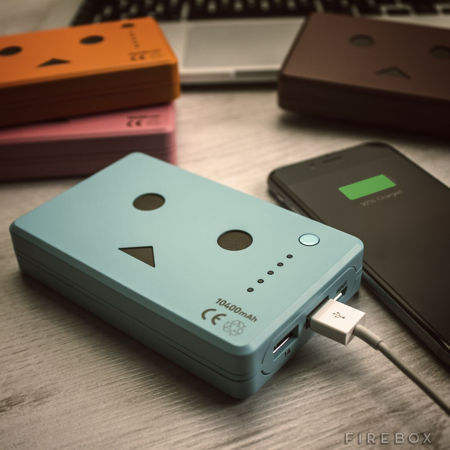 It was just last year when we did manage to take a look at the Danbo Robot Head Portable Charger, but since a year is a long time in the world of consumer electronics, it is with great pleasure that we bring you word of a brand new charger – an update or a refresh, if you will, in the form of the £49.99 Robot Head Power Plus Charger.

Since we tend to carry a whole slew of devices these days that would obviously need to be charged up from time to time (every single day in fact, when it comes to the likes of smartphones and tablets). Hence, it is not surprising that a product like the Robot Head Power Plus Charger is able to find a niche market to reside in. In fact, it is a massive 10400mAh battery that would carry enough juice within to charge up your iPhone 5 times, now how about that? In addition, there will also be 5 indicator LEDs that inform you of just how much energy it has left, and there is also an automatic power-off function that will be able to prevent it from running down.

One can pick from Chocolate, Mint, Pumpkin, and Strawberry shades, where it has the ability to charge a couple of devices simultaneously using its 1A and 2.1A port. The Robot Head Power Plus Charger itself will be recharged through the included MicroUSB cable, which would require around 11 to 13 hours to fully charge.