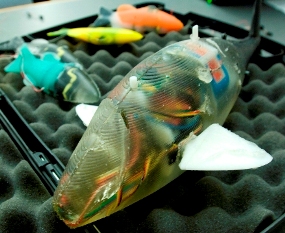 I finally got a chance to see that G.I. Joe: The Rise of Cobra last night, and I have to admit that it wasn’t all that. However, there was a scene that inspired this article as it contained a robotic fish.

I’m sure that if MIT engineers Kamal Youcef-Toumi and Pablo Valdivia Y Alvarado were watching this movie, they would probably say: “hey, they stole our technology”.

These two engineers designed their robo-fish to monitor pipelines, sunken ships, and pollution. Just think of them as miniature versions of those underwater probing robots that you saw in Titanic. Only it doesn’t look like that these grab on to anything.

It also doesn’t look like they can go too deep. Underwater pressures would probably take them out before they could find the Heart of the Ocean.

Anyway, these robot fish are about one foot long, and made out of some flexible polymer with fewer than ten parts. Earlier versions were actually smaller.

There is a video here, but it is quite short and shows the fish on a wire. That sort of defeats the purpose if the fish is on a wire, doesn’t it? I believe that they take 2.5 to 5 watts of power, and they can hopefully put them on a small internal battery.

1 thought on “Robot Fish Being Developed by MIT”