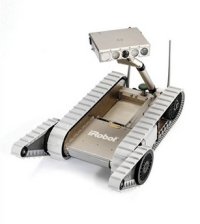 Remember the Taser XREP that we covered a couple of days ago? Well, apparently those guys at Tasers are pretty productive, as there is word of Taser working with iRobot Corporation to include tasers into the arsenal of robots. Yes sir – now law enforcers will be able to carry out its (sometimes destructive and inhumane) peacekeeping duties without risking life and limb from an exploding Molotov cocktail or otherwise. Neutral observers aren’t too thrilled with this idea though, as there is always the nagging fear that such developments could lead to robots who are self aware, deciding on their own whether to take a human life or not.

Of course, the upper echelons of iRobot downplays those fears as they mention that there will always be a human involved in making those decisions, so the notion of Taser-armed robots going amok is ridiculous to say the least, not to mention improbable. The existing PackBot Explorer will pair up with the Taser X26 in order to keep law and order in the event of a riot or unruly crowd. There is currently no word on when this new system will be on sale, while pricing details have remained scant. Currently, there is already a Taser-packing robot in the form of the Talon that has been fitted with a Taser, complete with laser dot aiming capability.

The idea of independent security companies springing up with these Taser robots are pretty viable, while individual wealthy homeowners probably would choose this over a Rottweiler since the latter can be poisoned to death before a thief makes an entry. Too bad you still need to employ someone to control the Taser robot, else it would just sit there like a dummy while someone makes off with his loot. I just hope that these people keep to their word and not develop an intelligent, self-aware Taser robot secretly.