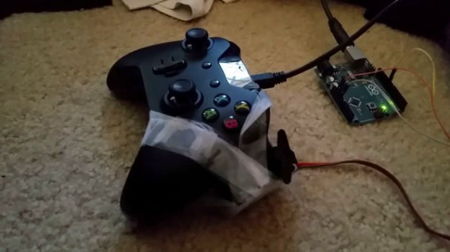 Some games do require this thing known as “grinding”, that is, collecting enough experience points so that they are able to increase their level by yet another tier, and so on and so forth. Having said that, this can prove to be quite a drag and is not one of the more pleasant aspects of a game, which is why this particularly creative gamer decided to make a robot perform such a menial task. In a game like Destiny (on the Xbox One and PS4), weekly missions happen to be the most fun content, but to maximize the fun level, one would have to grind through Destiny’s uninspired story and low-level content. Known as Redditor yavin427, he taped a couple of servos to his Xbox One gamepad with an Arduino to control them.

Hence, his Guardian will hit the relevant buttons on a timer, ensuring that a seemingly endless flood of enemies will be killed slowly but surely. In a particularly specific mission, the Guardian and enemies will spawn in such a manner where the enemies will make a rush for the Guardian from the beginning, ending up in his crosshairs. Through alternating punching and shooting enemies, yavin427’s character achieved a soft level cap of 20 – and this has happened while he was asleep. While it is not the fastest way to level up, it is definitely a fun experiment. All in all, this little experiment logged approximately 3,600 kills and 900 deaths.