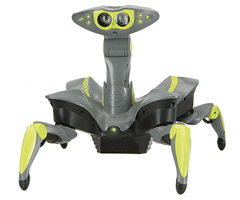 New video from long time Robots.net member “roschler” shows a Roboquad robot being controlled by voice, over the Internet with the help of Robodance and Skype’s video call service. The robot explores the house while beaming back audio and video to a laptop running only Skype. The laptop dials into the home computer which is running Robodance version 4, a free software program for making consumer robots do more then most people thought possible.

This mega-hack allows you to turn your Roboquad or other WowWee robot into your own remote controlled spy, accessible from anywhere in the world via the Internet, using the simple power of your voice. This hack does not void or affect the Roboquad’s warranty in any way. Robodance version 4 is due out at the end of November 2007.

Note: as of this time this system has not been tested on either an Apple IPhone or Palm Treo running Skype. As soon as this information becomes available the Robodance mailing list and web pages will be updated. Obviously a handheld would be the coolest form factor of all.

The Robodance Remote Viewing system is explained in detail over at RoboDance – Skype Robot Video, thanks to Robert Oschler of Robots Rule!