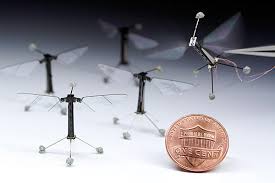 You may have heard about the sudden and mysterious drops in Honey Bee populations here in the United States and in Europe. This mass die-off  has some unbelievably scary consequences and poses a dire threat to the production of countless food sources and perhaps our very existence. Scientists allege that everything from pesticides to inbreeding are responsible.Whatever the case may be, we can’t survive without the bees. So what’s the plan?

First up is to pinpoint the conditions responsible for this destruction of the bees, and also to encourage people to raise colonies, but what if that fails? Well, there is a plan. Check out RoboBees, developed by researchers at Harvard University, these little guys are not much bigger than the real thing, and could be programmed to fly from flower to flower, pollinating our crops much the same way real honeybees would. While these guys are not exactly a replacement for nature, they could be just the tiny heroes we need to save us from starvation.

The use of these robotic insects doesn’t stop there, RoboBees can be used for surveillance, to map the weather, during search and rescue missions, traffic monitoring and, of course, to simply advance the technology of small scale flying robots.

Sadly, the RoboBees aren’t quite ready to hit the fields just yet. Because they’re so tiny, they ‘re hard pressed to carry a battery. The bees will also need some sort of guidance mechanism in order to properly carry out the tasks at hand. Right now, work is being done in order to iron out the power and microchip issues, and researchers feel as though we may actually see mass production of RoboBees in our future. Can you picture that? Picnics may never be the same.