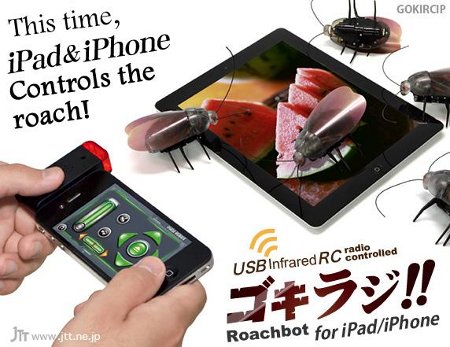 The Roachbot is a cockroach robot that looks so realistic, released in Japan earlier this year, but it seems that the company behind this cute little toy has decided to up the ante and make a revision of the Roachbot all the more realistic. Japan Trust Technologies, the company behind the Roachbot, will now come with support for the iPhone and iPad. After installing this exclusive app on your iPhone or iPad, those devices end up as the Roachbot’s controller.
New control features have been thrown into the mix, where you are now able to control a throttle which enables you to precisely adjust your Roachbot’s cruising speed – eventually hitting a maximum velocity which could not be achieved before with the previous model. Not only that, the new controls also boast of a “Trim Correction Slider” that enables you to perform slight adjustments to the Roachbot’s course, so that it looks all the more realistic instead of achieving the old school hard left/right turns that might just have given the game away.
The new Roachbot model will start from 2,980 yen (US$37) onwards.
Source