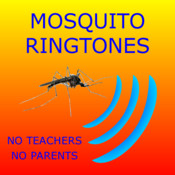 Did you ever notice that just as you grow up, you realize you’re missing out on a whole bunch of neat stuff that our kids get to have? I’m not saying I don’t have my own Nintendo and that I don’t play XBox and I haven’t dabbled in some World of Warcraft, but damn, if I were a teenager today I would have the world by the… you know what. Check this out, for several years teenagers have been able to receive calls and text messages late at night or in their classrooms and their parents and teachers have never had a clue. How is this possible? Quite simple really, humans have the ability to hear much better before the age of 20 and thereafter, we begin to lose our ability to hear higher frequency sounds. A certain high pitched sound was developed to keep kids from “gathering” at malls and shopping centers. So, teens started recording that sound on their cell phones to use as a ring tone. Now, when a teenager’s phone is ringing, only the kid, and probably most of his friends, can hear it. So this information isn’t that new, of course its certainly the first I’ve heard of it, so in case you missed it too, I’m passing the info on to you. That, and the fact you can now buy, what is called the Mosquito Ringtone, which is compatible with iPhone, iPod touch, and iPad for only 99 cents and available at iTunes What? Did you say something? Is that my phone?  ]]>