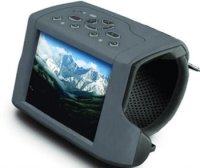 Just when you thought computers could not get any smaller than netbooks that are proliferating the market at this point in time, along comes Glacier Computer and their Ridgeline W200 wearable computer. Of course, you need not expect this to function as well as a netbook for obvious reasons, but it is interesting to see whether such a device has a place in today’s world of gadgets. After all, there are already tons of smartphones out there which function as mini-computers of sort, keeping track of your Word documents and Excel spreadsheets, connecting to the Internet with a much larger display than the W200 while sporting a relatively speedy processor. Let’s take a closer look at what this Windows CE-powered W200 has to offer right after the jump.

According to Glacier, the Ridgeline W200 is not meant to be used as a mainstream computing device, but rather will target emergency services, security, defense, and field logistics applications. It was meant to keep both hands of a user free, hence the wrist-mounted computer design that further saves battery power by automatically entering standby whenever it is being hung down alongside the body. Glacier also mentioned that the Ridgeline W200 will offer “continuous connectivity regardless of the user’s location” courtesy of its Wi-Fi, Bluetooth and GPS connectivity options. This device tips the scales at 10.2 ounces and will come with 3.5″ touchscreen display accompanied by 11 backlit keys.

Underneath the hood, you will find the W200 wrist computer powered by a Marvell PXA270 400MHz processor, 128MB RAM and 1.2GB of internal memory (now that’s a pretty weird number, don’t you think?), a 3.5″ touchscreen display at 320 x 240 resolution, USB 1.1 connectivity (bummer – who uses USB 1.1 devices these days anyways?) and a tough exterior that allows it to function in a temperature range of -10 to 50 degrees Celsius. No idea on when the Ridgeline W200 will be released nor how much it will cost though.