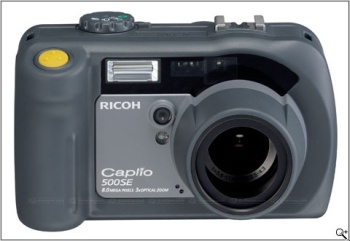 Canon may not have been listening when I asked for a bluetooth camera but it looks like Ricoh were!

The new Ricoh 500SE is automatic, it’s systematic, it’s hydromatic… Errr, where were we? Oh yes, it’s a waterproof, ruggedised 8MP digital camera with Bluetooth, Wifi and GPS all built in – how cool is that? I don’t know how well – or even if – it will work with the Seagate DAVE since neither product has been released yet but I do like the idea of having a hard drive getting the photos directly from the camera.

I also like the idea of the photos being automatically geotagged for reference – you can do it now with various bits of software and hardware but having the photos fall out of the camera already location encoded is a really nice idea.

Other highlights include a design that’s optimised for use wearing gloves – clearly Ricoh are aiming this at people who expect to be taking photos in all weather – and the now ubiquitous video mode.

Photo courtesy of www.dpreview.com, where you can also find the full press release.