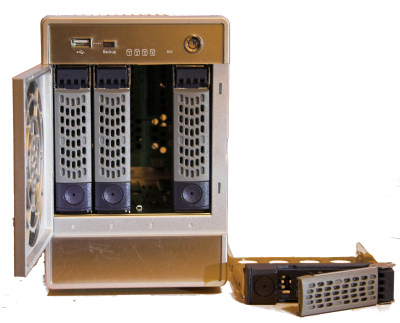 Problem: You need hard drive space to store your vast downloaded legally purchased music and movie collection. Plus the tens of GB of photos your digital camera has spewed out over the years. Plus all of the documents, email archives and general digital detritus that are a feature of life with a PC.

You’ve also got at least a main PC and a laptop around the house that need access to that data, plus perhaps something to stream videos to the TV or HiFi, so something that plugs into a LAN would be nice.

If you’re like me you only need to learn that lesson once which is why I went shopping for something that had RAID capabilities. What that means in non-geek speak is that the data is stored on many disks instead of one so you get redundancy. When a disk dies, you can just replace it with a new one and no data is lost.

I also had 2 machines sitting in a cupboard making noise and heat to do nothing but serve up the various drives I’d bought over the years. It was about time to upgrade and replace all those machines and disks with one box.

After a fairly in depth look at the market for home NAS devices I settled on the Infrant ReadyNAS NV+. So what is it? Well the short version is that it’s a box you fill with disks, connect to your network and forget about. You can buy it bare to put disks in yourself, or you can get pre-populated versions with up to 2TB. For details, read on.

The specs don’t prepare you for the looks though – this thing is cool! The unit is about the size of a large toaster. It’s not a whole lot bigger than the disks your putting in it and the polished finish looks great. It’s almost a shame that it’ll spend its life in a cubpbaord…

The advantage of buying it without drives is that it’s cheaper and you can add more disks as and when you run out of space. To start with I put in a pair of 320GB Seagate drives which (because of the redundancy) gives me a shade under 300GB of usable space and 2 spare drive slots for future expansion.

For the technically minded, the ReadyNAS has a really neat trick for auto-growing the array. With 1 disk there’s no redundancy. With 2 disks it sets the second disk up as a mirror. To add more space, you just power it down, add a new disk and reboot it. It then converts the array from RAID1 to RAID5 (which does take a bit of time) and when it comes back up your newly added storage is available. Simple and painless. It’s also worth pointing out that your existing data is preserved during the array conversion and expansion – not something that every NAS device can claim!

Setup
Setup was a breeze. 1) Insert disks. 2) Plug the ReadyNAS into your network. 3) Power up. 4) Wait about 2 hours for the ReadyNAS to initialise the disks. 5) Install the supplied RAIDar software on your PC which finds the unit and opens up it’s web administration interface.

From there all the setup is done via a simple set of web pages. At a basic level you just create shares to be visible on the network. If you want to get really detailed you can set up individual users with their own passwords and disk quotas. You can also link it to a corporate Active Directory although that’s outside the scope of this writeup.

You can also enable options to enhance performance for Windows or Mac clients as well as expose network shares over FTP or HTTP. It’s quite versatile!

The USB Ports
As I alreaady mentioned, the ReadyNAS has 3 USB ports. These can be used for 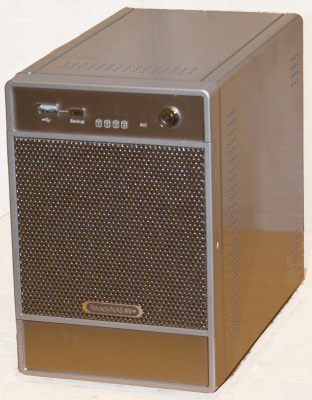 Monitoring
This is often overlooked. Think about it – you’ve got something sitting there, quietly humming away to itself in a cupboard. You never go in there as long as it’s working. Then a disk dies. No problem, it’s got RAID so you’ve not lost any data – yet. But unless it can tell you that the disk has died you’ll be blissfully unaware so you won’t know to replace it. RAID is only as good as it’s spare disk!

The readyNAS has all this covered. Point it at an email server and it will let you know when a disk has died, when it’s running low on space, when it had a power cut… you get the idea. It will also shut itself down if the disks start running outside their safe temperature – data security is the word.

Media servers
One of the features of the ReadyNAS is that it comes with built in media servers. It will stream audio and video via uPnP to devices on your LAN, such as the DLink DSM520 or Snazio NetDVD. It also contains an embedded version of Slimserver to control my favourite music streamer from Slim Devices.

Last but not least there’s also an iTunes server, if you’ve chosen that route for your digital home.

I’m using the SlimServer plugin to talk to my SB2 and it works flawlessly streaming FLAC files. The web interface is pretty slow compared to the same software running on a PC and navigating menus on the SB2 is perhaps slightly less responsive than it would be if I was running the server software on a standard PC. On the other hand running it on the ReadyNAS lets me retire the PC completely which means I have one less box making heat and noise and draining power. For me the tradeoff is worth it, at least for now.

Performance
I’ve not run any performance benchmarks on the NAS. It’s slower than having a SATA drive in the PC, and it’s faster than my old USB hard disk. Toms hardware ran a fairly in depth technical review of the ReadyNAS here and I won’t repeat their tests. Suffice to say that in my environment where I mainly need to stream media around the network and edit digital photos it’s fast enough for me.

Final thoughts
It’s not a cheap option, especially compared to a straightforward USB drive. But if you care about your data you’ll appreciate the security that RAID brings and data security is what this device is all about. If you want an easy to use way of putting all your data on a network, making it secure and guarding against disk failure then the ReadyNAS should definitely be on the shortlist.