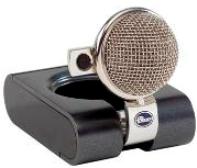 I got a chance to a catch a sneak preview of Blue Microphones’ new line for 2009 at CES, and I was very pleased to try out the Eyeball.

The Eyeball is a specially designed camera that takes after the Snowflake with its spherically shaped microphone. Its base is a clip-shaped thing that rests atop a laptop easily, and serves as a stand in case the user wants to put it on any flat surface.

There is a video of me giving a review of the Eyeball while being filmed by the Eyeball. Yeah, that’s awkwardly worded, but just watch it, and it will make sense.

The Eyeball has a camera lens that will pop in and out at a touch. This will insure that the lens stays covered when you don’t want to be filmed. I believe that is important in an age when many programs turn on the webcam automatically.

The Eyeball is compatible with many programs including Skype, iChat, Windows Live Messenger, Yahoo Messenger, AOL Instant Messenger, and Google Talk. It requires no special software for installing, and plugs right into a USB port.

You should be able to purchase the Eyeball from Blue Microphones for a little less than $140 on sites like Amazon.