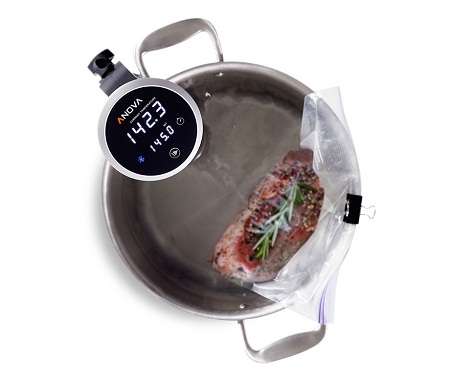 When you want to make the perfect meal, you have to keep a careful eye on cooking times, or you’ll end up with a charred entree. Living a busy life adds a layer of complication to making this perfect meal as emails, family, and work can pop up and interrupt the process. There are gadgets out there though that have your back in the kitchen, and will help expedite cooking with little to no effort from you. The Anova Sous Vide is one such gadget, and with my combined curiosity and hunger, I put it to the test.

This device is a tried and true method that is often used in professional kitchens. It is essentially a heating implement that you submerge in water along with your vacuum-sealed food, and it will circulate heated water to cook your food for you with a measure of consistency that’s hard to achieve. That perfect steak you paid $50 for? It was probably cooked for several hours in a sous vide and then seared to make it look pretty.

The thing about the Anova is that it’s made for people who want to cook restaurant-quality meals for their family at home. Not only that, but it aims to be insanely easy to use, as you can set it and forget it on your phone. All you need to do is attach this to the side of the biggest pot you own, clamp your food in a resealable bag (I used a Ziploc and it worked just fine) onto the side in the water, cook, and add the crispy aspect at the very end of the process. You will need to plan ahead for how long the cooking times will take, but that’s about as difficult as it gets.

This is a pretty sleek-looking device. It has a matte rubber finish, stainless steel covered heating implement, clear plastic bottom for stabilization, and a clear scroll wheel for selecting temperature and time, which light up as blue digits when it’s on. The touchscreen at the top uses bright LEDs to let you know what the current temperature and goal temperature are so you can watch it go up in real time. It’s a pretty bulky device, but not so much so that you couldn’t put it in your suitcase and take it with you somewhere. While having it tethered to the cable was a bit annoying, it was long enough that anyone could find space for it in their home.

Let me make something perfectly clear. If you do not have a vast interest in the subtle results of cooking times and temperatures, this is a purchase you will not want to make. That being said, you probably wouldn’t keep reading about this sort of gadget if you weren’t interested in it. This performs exactly as described, and is only limited by your imagination with food as you can make everything from chicken to cookies if you’re ambitious. I had a few friends that were exceedingly put off by the process of preparation for it, seemingly because it was some new-fangled machine. The end result was nothing to scoff at, though I did make a rack of ribs a bit more…dense to chew than I would’ve liked.

The app that works with it has a decent enough range of recipes, and there are plenty of recipes you can find elsewhere online. You set the temperature and time, and wait until it lets you know the desired heat has been achieved. I’ve cooked a variety of meats and side dishes, and found that making eggs (of all things) is my favorite, as you can cook a MILLION of them all at once to custard-like perfection and have them in the fridge as snacks. I was also using a 2 gallon bucket to cook in, so that helped the amount I was able to make too. Since the purpose is to cook things at a lower temperature over a longer period of time, everything from the texture of an egg to the pink of a steak can be controlled from your phone.

This device makes it insanely easy to get the timing for a group meal correct, and in a foolproof way. Since the temperature is so much lower, you don’t have to worry about leaving your food in for another 5-10 minutes to keep it warm without it changing completely to jerky. The difficult aspect of this is the prior planning. If you’re in a rush, the lower temp and longer cooking time means you don’t get to use this, period.  On the plus side however, your proteins won’t overcook, the meat stays juicy, and since the spices have nowhere to go, you can get a hint of them throughout the entire cut of meat. Being able to play with the time and temp is fun for any serious foodie, though try to do your proper research beforehand or you’ll end up overcooking an entire rack of ribs and end up being very upset with yourself.

Available for purchase on Anova