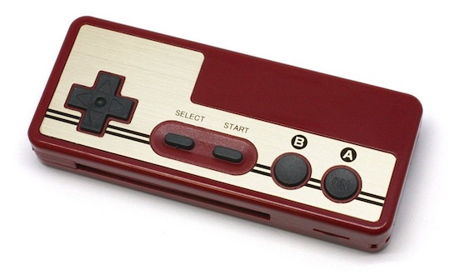 We live in a world where there are any different kinds of memory cards in play, and it can be pretty difficult trying to keep track of what is stored where. A memory card reader would definitely come in handy where accessing various kinds of memory cards on your computer is concerned, and instead of taking the road well traveled, why not try something different – something that will be able to kickstart a conversation even with strangers while you work? I am referring to the $112 Retro Nintendo Famicom Battery & Card Reader, and the name itself pretty much says it all.

After all, those who grew up in the era of 8-bit gaming would be familiar with Nintendo’s Famicom, which is also marketed in the US as the Nintendo Entertainment System, or NES for short. The latter has a grey design with red buttons, while the Famicom over in Japan has a gold shade with red livery. This Battery & Card Reader will come in the Famicom controller design, where it packs in a 3,600mAh battery that comes in handy to charge up power hungry devices, as well as is capable of reading a microSD memory card. Each purchase comes with a strap so that you can attach it somewhere in a jiffy.