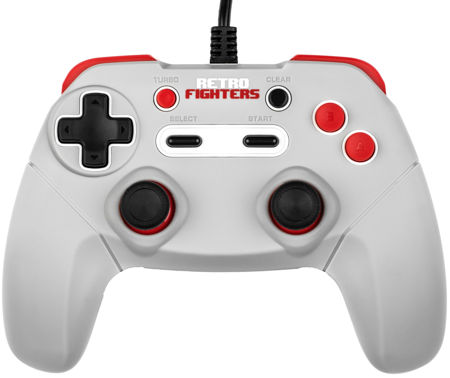 The gamepad is one of the staples of console gaming, and it can never be separated from the console itself even if we are living in the age of VR (Virtual Reality) and AR (Augmented Reality). Basically, even when the Nintendo Wii broke onto the scene with their Wiimote, there was still space for a Wii Controller for obvious reasons — you simply cannot waggle your way through Zelda or Mario. Well, Retro Fighters have come up with their next generation NES retro controller, updating a gamepad from a console that many of us grew up with in our very first exposure to home consoles.

This is the very first product from Retro Fighters, calling the next generation designed NES controller as the Jab Gamepad. Do not scoff at it even though it might look as though it hails from the 1990s, as the Jab Gamepad happens to be the very first NES compatible controller that has been redesigned from ground up, sporting next generation features and attributes in order to keep up with the times.

The entire look has been updated to make sure it is still relevant in the current century, although some might beg to differ. At least it is ergonomically shaped, which should deliver a potent user experience without losing any grip as you play. The D-pad looks comfortable enough to play with that it places less stress on the thumbs, and the ergonomic layout of the B & A buttons would be well appreciated by gamers who love marathon sessions.

Not only that, there are B & A shoulder and trigger buttons which lets you use it in conjunction with analog sticks or the D-pad, paving the way for many other button combinations. Heck, even a turbo function has been thrown into the mix, allowing you to gain a wee bit of boost as and when required.