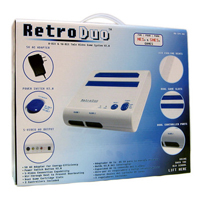 As an avid retro Nintendo system gamer, I have to say, this is one of the coolest gadgets I’ve had the pleasure to be introduced too. Sadly, it’s been years since I whipped out my old Nintendo systems to take a whirl at Super Mario or Duck Hunt. Hell, even a good game of Paperboy would do the trick. It’s just been too long. My old systems are too dust covered for me to want to put in the effort.

The Retro Duo Emulator combines the two prototypical gaming systems from my childhood, NES and SNES, into one magnificent, albeit ugly, gadget. So the Retro Duo isn’t the prettiest device on the block. Who cares? I’m not going to be staring at the system design as I hop along Goombas, collecting mushrooms and hoarding coins.

The Retro Duo Emulator will play most titles, including the Super Famicon games, which don’t even need an adapter. The emulator output comes in the form of a standard AV RCA socket, and the system with compatible with both the old SNES controllers and even the NES gun controller!

At $45.99 for the entire device, this is a hard gadget to beat in both affordability and awesomeness. I’m going to have to look through the boxes upon boxes I have of old games, which will be inspiration enough for purchasing this awesome emulator.