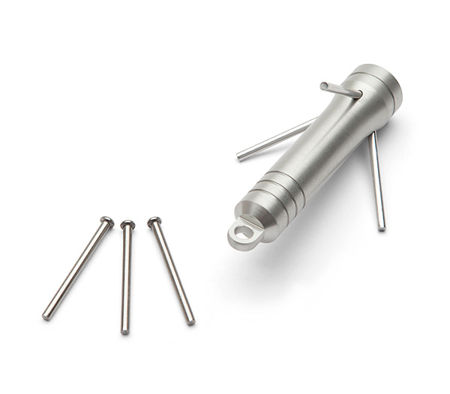 I suppose if Bruce Wayne’s alter ego, Batman, were to write a book, there will be many different topics from where he can pick from, but one of the staples of the “Batman curriculum” would be “How to use a Grappling Hook 101”. It makes perfect sense to learn from the best, of course, where Batman has had his fair share of experiences with the grappling hook in the past, and hence, he made grappling hooks cool. Everyone needs one of these bad boys, and what better way to get the job done than with the $29.99 Retreev Compact Grappling Tool?

First of all, the Retreev Compact Grappling Tool will arrive with both aluminum and stainless steel spikes, and there is also a rare-earth magnet which has been mounted in head in order for it to be used to retrieve metallic objects. Needless to say, owning a grappling hook alone does not a Batman make, but it is a step in the right direction just in case you were wondering. Since you would most probably not swing from rooftop to rooftop with the Retreev Compact Grappling Tool, you can use it for other functions, such as picking stuff up from some seemingly inaccessible place, not to mention to shake the branches of a nearby tree that has your R/C helicopter stuck right in between. The body itself is aircraft grade 6061-T6 aluminum, and do bear in mind that this was not developed to support the weight of a human!