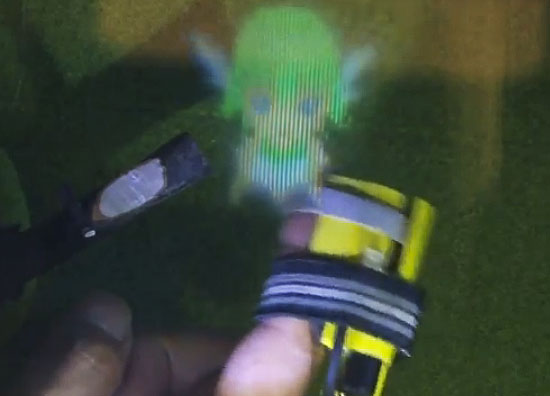 This is the RePro3D system, and it is under development by Keio University in Japan.
My Source calls it a miniature holodeck, but I don’t believe that this is an accurate description. You can see in the video after the jump what it actually is, and it combines several technologies.
The user looks into this box, and projectors create a naked-eye 3D fairy character. An infrared camera tracks the users hands, and that device that you see in the photo is for haptic feedback. It reminds me of those devices we discussed yesterday that could be used for virtual video game stabbings and shootings.
The video explains how the creators were inspired by video game characters, but they seemed “lonely” inside the video screens. The designers wanted to create more interactivity in the 3D world, and you can watch someone playing with a green fairy on a tiny seesaw in the video.
The designers also hope that they will make it possible for two users to interact with a virtual character in the future. If they perfect that process, then I would imagine that these designers are going to have something bigger and better than the 3DS. I think that Nintendo needs to invest in this, and let gamers interact with Pokemon.