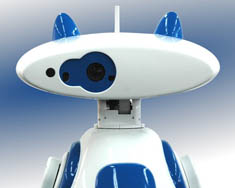 Alright, if your company is having a hard time to find a reliable secretary or assistant why not just hire a robot instead? That is exactly what Ubiquitous Exchange, an organization based in Tokyo, is offering. For an hourly wage you can hire Ubiko, a robot that is able to welcome visitors, answer questions and carry objects around.

What is the hourly wage, though? Grab your seat, because the little robot goes for $445 an hour. I mean, for that price I would at least expect the gizmo to do the coffee and clean the floor… I don’t know about your country but here in Brazil you can hire two complete footbal teams for that price, supporters included.

Anyway, there could be a reason to pay such high wage however. If you display an intelligent robot as your secretary it is probable that you will receive a lot of publicity. A manager of the company manufacturing the robots commented: “”If we look at these robots as advertising and public relations businesses, the price is quite cheap, actually.” He also confirmed that there are some 20 companies already waiting to receive their own robotic assistants.

The idea of renting service robots is not new, and the Ubiko robot will reinforce it. Prior to being offered as a rental service the robot was tested in hospitals with quite a success. The producers also mentioned that Ubiko could be used as a guide in airport or train stations.