Following on from yesterdays gift guide of robot toys, we now have a guide for the big kid who loves remote control toys, suitable for all ages (especially 36 year olds), if anybody is looking at buying me a Christmas present, I’d be very happy with anything from this list, especially those near the bottom *hint, hint*.

With a lot of the remote control toys this year there seems to be something of a combat theme, so they could make a decent joint present which means you get 2 gifts for the price of one. 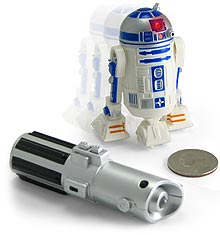 If you know somebody that used to (or still do) collect Star Wars figures then this would be a really really cool present. It’s about the same size as the original R2D2 action figure but so much more fun.

If UFO’s are your the recipients thing then this the R/C UFO with docking station could be a good gift, by the sounds of the reviews it’s a bit flimsy so this one could be better for the careful UFO fanatic. 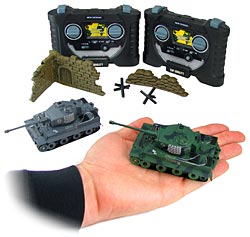 This is another one of those gifts where you get 2 presents for the price of one, so you’ll just have to play too.

These detailed diminutive r/c tanks feature authentic tank sounds and IR based “laser tag” action with realistic recoil. A hit momentarily disables your opponent. Get enough hits and take control of your enemy’s tank. Each set contains two-tanks, but buy an extra set and up to four tanks can battle at once to solve those more complicated office disagreements. 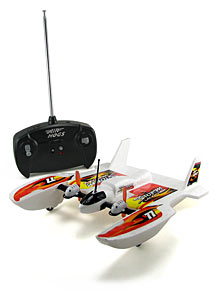 If you can’t decide whether to buy a remote control car or plane then this is the answer, Storm Launcher, the flying car thingie.

I think the video demonstrates it better than words: 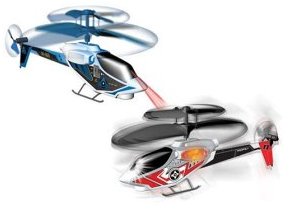 One of last year’s Christmas best sellers was the Picoo Z, this year I think it will be totally eclipsed by the Air Hogs Battling Havoc R/C Helicopters, these are just so cool, two remote control helicopters that have to shoot each other out of the sky.

These remote-controlled cars have infrared lasers that are fired by the handheld remotes, allowing two users to engage in combat, or one of the cars can be switched to artificial intelligence mode, enabling one player to battle a microprocessor-controlled car. The remote controls use digital proportion trim to move the cars forwards, backwards, right, and left, including clockwise and counterclockwise pivots that allow you to turn quickly and fire at your opponent. 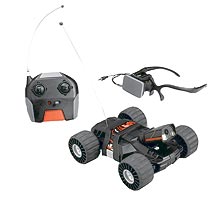 How cool is this, not only is it remote control but it has a camera with night vision.

Video Car, adjust the camera angle, turn on the night vision, put on the Heads Up Display (HUD) visor, and drive your way to the suspicious noise. That’s right – this quiet R/C car has a video camera mounted on the front. It broadcasts to the black and white LCD HUD which plugs into the remote. You’ll see everything your Spy Car sees (in bright light or in total darkness). 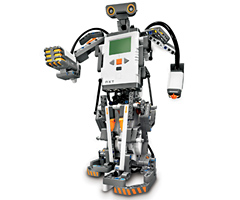 The award winning Mindstorms NXT Robot Kit is one for the more robotically DIY orientated remote control enthusiast. It’s expensive but will provide hours of enjoyment for young and err, young at heart:

The most awesome, greatest, bestest(I know it isn’t a word) LEGO kit I had. It’s so good and so easy my little brother actually is better than me. That is embarrassing. But to say it in one word, awesome.

Price: The LEGO ™ Mindstorms NXT Robot Kit is for sale at Discovery for $249.95.