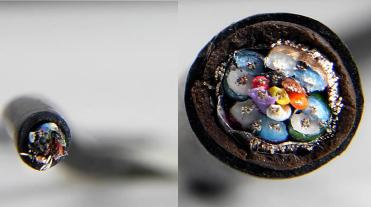 Most of you have probably used HDMI cable for your home theater, and this thick cable is going to be more in demand.

After all, many phones like the Nokia N8 have an HDMI port so video files on the phone can be viewed on bigger screens. If every phone has this feature, then not only will it increase the demand for HDMI cables, but create a need for them to be thinner, lighter, and more portable.

It would appear that a company called Red Mere is ahead of the curve as they are making thinner HDMI cables. Guess which one of the HDMI cable cross-sections in the photo above is a RedMere.

How is this possible? I talked to RedMere at CTIA Fall 2010, and they use some sort of chip that fits in the HDMI plug itself. They wanted to show me the chip, but they seemed to have lost it at their booth.

I’m not certain what to think of that, but I won’t hold it against the company. In fact, I think RedMere is going to have a lucrative future when everyone needs an HDMI cable. Perhaps there will come a day when all phones have an HDMI cable that can stretch and retract, and RedMere will be the supplier.