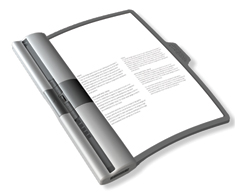 This is the third part of the “red dot design award” series (you can read part 1 here and part 2 here). In this part we will cover two winners of the Interaction & Communication category of the award.

ROEM: this electronic book reader was created using a rollable electronic paper to ensure portability when closed and a comfortable reading when opened. The device was developed by Ben Lai Kin Mun and it uses wireless connections (Wi-Fi or Bluetooth) to download text documents, photos or other documents. Another very innovative feature is the power backup: “ROEM also offers an on the move back-up power charging feature. The screen’s flexibility allows piezoelectric material to be integrated with a variety of polymer, synthetic adhesive, advanced microprocessor, flat size battery, silicon-based integrated circuits and flex circuits, all within the device. This enables it with self-charging capability by converting mechanical stress to electrical power – simply by fanning the screen.” 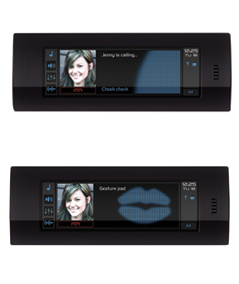 Onyx: the handset was created from the partnership between Synaptics and Pilotfish and instead of a touch screen the device is equipped with an “optically transparent capacitative sensor”, and this feature as opposed to traditional touch screens is able to recognize not only taps or points but also gestures. The result is that the user is able to operate the mobile phone without needing to touch it. “For the near future, this creates new interaction possibilities beyond icons and keys, such as assigning functions to two-finger taps, closing tasks by swiping an “X” over them, or sending messages by swiping them off the screen. For further concepts, gestures will increasingly take over the roles traditionally assigned to keys and software “buttons,” leading the way to complete gesture-based user interfaces.”