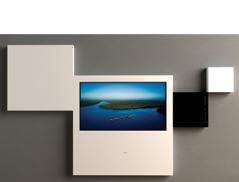 The “red dot design award” is one of the most prestigious design competitions around the world. The awards are divided into two main categories: the “design concept award” which is given to innovative ideas and creative designs that are not being commercialized yet and the “product design award” which goes to products that are already being marketed.

“Each year an international jury reviews and evaluates the submitted products according to criteria such as degree of innovation, functionality and the formal quality. This ensures the seriousness of the competition and its international acceptance.”

In this series of posts we will cover the most interesting gadgets and products that appeared on the 2006 “red dot design award”.

The winner of the entertainment category of the “concept design award” was a very interesting television set called Zgiga tv2. The concept, developed by Ori Takemura, was created to bring together a television, a piece of furniture and high end interior design.

The television set, in fact, can be used as a shelf as well, and the width can be customized to fit the needs of each customer. The black square that you see on the picture, called cube, is a Blu-Ray/HD DVD player and a touch sensitive control panel.

The whole product is made out of wood, combining luxury with simplicity. As the site described it: “a system designed to raise unmatched feelings, even when it is turned off.”

Tomorrow we will cover the science category of the “red dot design award”, stay tuned!