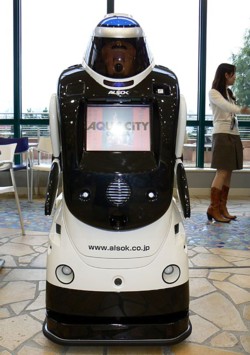 Using robots as guards to create a reliable security system is an old idea for science fiction books, but apparently the concept is about to become a reality. The Japanese company Sohgo Security Services (ALSOK) announced that it will be creating a semi-autonomous security system based on the interaction between robots and humans.

The robot to be used in the system is an upgraded version of the Guardrobo D1, produced by the same company. It weights 200 pounds and stands fifty inches tall. Each robot costs $3000 and a the complete security system is estimated from $10000 to $20000.

The Reborg-Q robots can either be programmed to patrol specific courses or be controlled remotely through joysticks. Every robot is equipped with four cameras on the head and shoulders so that it is able to recognized humans, water leaks or fire and report back to a central room where the human security will be watching the videos to determine the danger of each situation.

Apart from monitoring capabilities the robot can also be used to interact with people. It includes for instance a touch screen monitor, a RFID card reader and a voice synthesizer to give information about the weather or promotional announcements.

The security system is already being tested in a shopping center and the Sohgo Security Services confirmed that they will be deploying the system in 10 more locations around Japan by next year. It looks like in the near future we will need to get used to robots walking around and performing different tasks here and there.