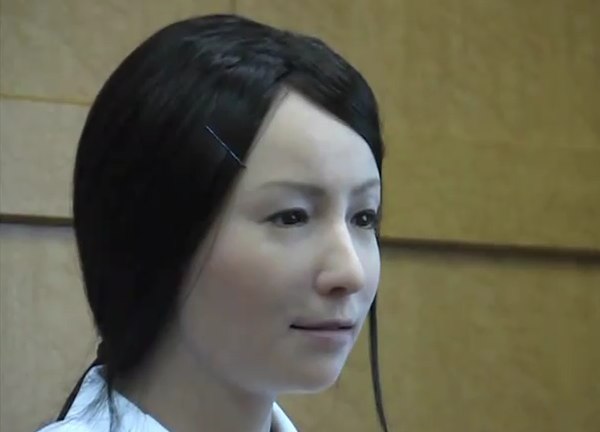 This is the Actroid-F. I realize that sounds like title for the theme of Beverly Hills Cop by Harold Faltermeyer, but according to the Guinness Book of World Records, Actroid-F is “the first true android”.

You have to watch the video after the jump to see Actroid F in action. I find that even though she is sitting down, she shifts her head around in a bobbing motion like a real person.

You might be wondering why she is wearing a nurse’s uniform. Apparently, the robot maker, Kokoro, says that she is supposed to give patients “a heightened sense of security”. So does this mean that they want Actroid-F androids to be nursemaids? That is some pretty crazy stuff if that was true. Man, if you think that medicine is expensive now…

Still, it is one more step in creating robots that look like people. I’m going to ignore all the science fiction films that say this is a bad thing. I’m guessing that in the future, Actroid-F (or some later letter in the alphabet like Actroid-G) will be walking and talking while she brings you your meds with perfect bedside manner.

You know who she reminds me of? Aki, the main character from Final Fantasy: The Spirits Within (a film that you can watch for free on Crackle.com). That film just wasn’t really that good, but I will admit that the characters looked about as real as CG characters could look back in 2001. In other words, Actroid-F looks human and can imitate human behaviors, but still comes short in looking or acting like a real human.