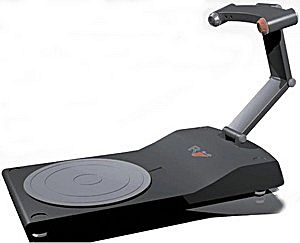 A while ago, I reported on the Minoru Webcam that lets you shoot video footage of yourself in 3D, and I have recently discovered another product that incorporates more 3D technology that has been all the rage since CES 2009 and beyond. Granted, it may not be a new Superbowl commercial in 3D, but it could change home computing as we know it.

I don’t really have much detail on this product, but the Real-View 3D Scanner has two stereoscopic cameras as well as a turntable function that can apparently render an image on the scanner in 3D. I’m not certain how long it has to scan or spin to do this process.

Apparently, this tech is related to 3D image capture technology used for medical cameras in non-evasive surgery. It is also the “first ever low cost 3D desktop scanner providing the consumer with the ability to scan and capture objects in full topographical 360 HD”.

Sadly, there is no word on an availability or price. However, I would think that the company that makes this product, the Real-View Corporation, would want to hype this up as much as they possibly can.

After all, I can’t wait for an era of 3D scanning. Now instead of scanning a piece of paper or a photo, you can take an actual object and send the 3D rendered image to all your friends. I wonder if you will need to download special software to see the image on either end.