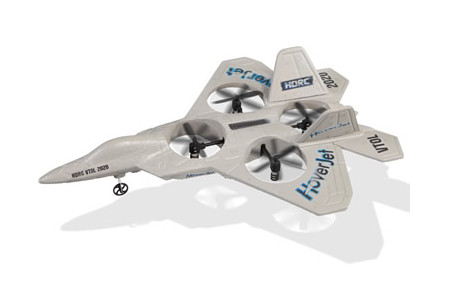 It is said that the 20th century is the bloodiest century of all, where more lives have been lost in this particular century alone on the battlefield compared to the wars of all the previous centuries combined. Having said that, the continued development of weapons and warfare marches on at a frenzied pace, as we see more and more new developments in the field that can kill more in the most efficient manner possible. In fact, having a hovering jet is advantageous on the battlefield, since it offers the best of both worlds – a jet and a helicopter. Why not let your imagination rip with the $129.95 RC Hovering Jump Jet?

The RC Hovering Jump Jet is capable of performing vertical takeoffs and landings in the same manner as that of a jump jet, as well as to hover over in mid-air. This particular battle-ready jet will feature a couple of pairs of vertical and horizontal stabilizers that are located on either side of the fuselage. The moment it becomes airborne, these additional wings will work together with a built-in gyroscope, allowing it to hover steadily in place. It will rely on an anti-interference 2.4 GHz controller, so that the “pilot” on the ground is able to guide the nimble aircraft to climb or descend, fly forward or backward, or rotate in either direction. 40 minutes of charging for its lithium-polymer battery delivers 8 minutes of flight time, and the remote itself would be powered by half a dozen AA batteries.