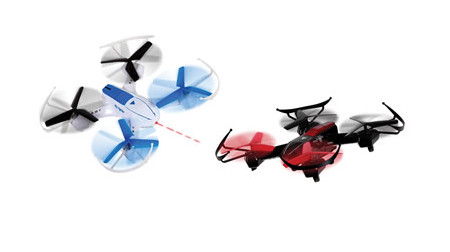 It does feel as though drones are being featured under the spotlight from time to time, although in more recent times, the news has not been all that favorable to drones. Well, perhaps you might want to see how drones can be fun – and safe, to have around your home with the $149.90 RC Dogfighting Drones.

Touted to be part of “The Only” series, I suppose that particular claim does hold some sort of water – at least for the moment, as most drones more or less function in a singular manner and aren’t all up for working with other drones, although there has been attempts at swarming drones in academic and military circles before. With The Only RC Dogfighting Drones, you know that you and your opponent would be up for a good time, since they dogfight for air supremacy using harmless infrared beams. A 2.4 GHz remote control with a 30′ range allows one to control their respective drones, where all four propellers provide the up/down, left/right, and forward/backward maneuverability required for engaging an opponent. Each drone’s rechargeable battery offers 5-minute dogfights from a 30-minute charge via the included USB cable.