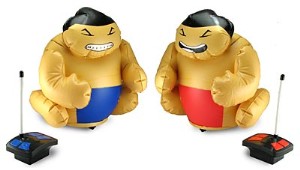 If you are the type of person that enjoys watching Sumo fights (like this one that lasts 30 seconds which is above the average), there is a new toy for you to play and practice – this will make you remember the fat peoples sport. It doesn’t have all the good techniques like the real sumo fighters have, nor does it weight a lot – it is more basic but the fun is still for real.

The Remote Control Sumo Wrestler package contains 2 fighters, there is a blue and angry one that looks to be smiling and likes to show all his teeth + a red that is screaming for help to take a dump like you can see on the image.

Each one measures 13-inches and about the weight problem, here are my calculations: they are inflatable so probably it is just a couple hundred grams. On the other hand, each Sumo needs a lot of energy (read 4AA batteries) in order to work, since one AA battery weights 23 grams (according to wikipedia) it means that one inflatable toy + 92 grams = 130 grams approximately.

To control your wrestler there is a remote control (duh) that has 2 buttons, I’m presuming that on the right side it’s the button to move forward while on the left button the Sumo guy can move backward while turning – this is the special trick to win all your fights.

And to make the fights more realistic, there are special voices that re-create what the Sumo referees say during the match, more exactly – “Hakke-yoi” and “Nokotta” – which in english means something similar to “keep going”.