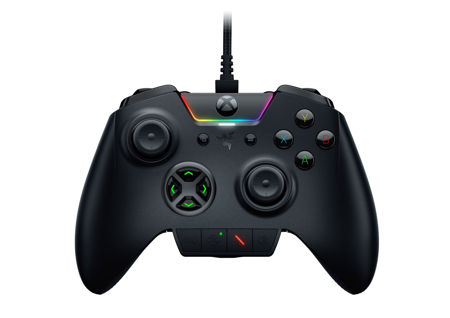 When it comes to no-nonsense gaming hardware, there is one name that constantly crops up on the list of many people: Razer. The company is back yet again, this time around with the Razer Wolverine Ultimate gaming controller which will cater to gaming proponents on the Xbox One and PC platforms. This is an officially licensed gaming controller for both platforms, and has been specially designed in order to have it adapt itself to virtually any kind of gamer. Why do we say so? Read on to find out.

The Razer Wolverine Ultimate sports not one, but a couple of interchangeable D-Pads, in addition to a wide range of interchangeable thumbsticks that sport different heights and shape. This ought to have you salivate already if you are the sort who is extremely meticulous about your preparation before an intense gaming session. Not only that, there is a grand total of 6 remappable triggers and buttons, where it can be achieved via Razer Synapse for Xbox and on-the-fly, in order to enjoy the maximum degree of customizability.

To sweeten the deal, Razer has also included an integrated RGB lighting strip which can be controlled using Razer Synapse for Xbox, further establishing additional methods to personalize the controller. Not only that, it also works as a stage to introduce Razer Chroma to Xbox gamers everywhere, as gamers now have the choice of selecting from 16.8 million colors in addition to a range of effects such as Static, Spectrum Cycling, Breathing, and Wave, among others.

The Razer Wolverine Ultimate is also special as it is the very first console product from the company that supports the Razer Chroma SDK, enabling developers to integrate advanced lighting capabilities for Xbox One games. The asking price for this bad boy stands at $159.99 in the US, although those living across the pond will have to fork out slightly more at €179.99.