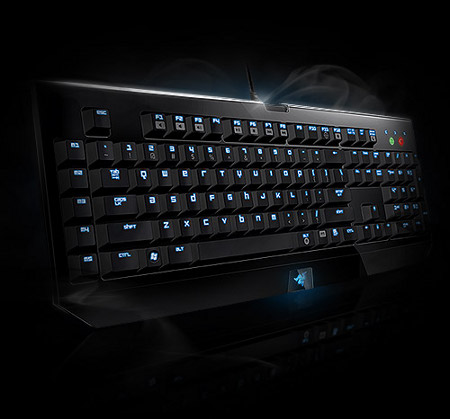 Everyone by now should more or less have heard of the Razer brand when it comes to computer gaming peripherals that are of high quality. Well, the latest device to join the fray would be the Razer BlackWidow, where this mechanical gaming keyboard was specially engineered for gamers who want nothing less than superior tactile feedback and comfort while playing. It is interesting to note that from Razer’s point of view, the majority of mechanical keyboards in the market today are standard mechanical keyboards rebadged as gaming keyboards that feature stiff keys that cause key actuation fatigue. Basically, what Razer is saying is this – such keyboards will leave gamers off for the worse since it decreases gameplay performance instead of enhancing it. Razer’s BlackWidow offers something different, being built from ground up by gamers while boasting a uniquely tactile mechanical key architecture that provides each key on the keyboard with a crisp response and tactile feedback similar to a mouse click. When used in tandem with a unique key actuation point halfway through the full travel distance, the optimized mechanical key structure found in each of the Razer BlackWidow’s keys provide for greater precision and accuracy versus other traditional mechanical keyboards.

The keys on the Razer BlackWidow also boast one of the lightest actuation forces for all keyboards. They have been specially optimized by the Razer design team from readily available components, albeit going through rigorous quality standards from Razer to deliver a product of unparalleled quality. Apart from that, the Razer BlackWidow is also the only mechanical keyboard which comes with fully programmable keys with on-the-fly macro recording, not to mention five additional gaming keys to up the ante when it comes to gaming compatibility and performance. It will be out this September for $79.99, although folks living across the pond will have to fork out theoretically more (after conversion) at €79.99.