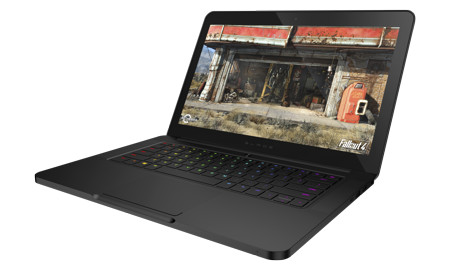 Razer has long been a familiar name where gaming peripherals are concerned, and you can be sure that they are not going to rest on their laurels anytime soon. Well, it looks like their Razer Blade gaming laptop has just received a boost in terms of hardware and specifications, where the stuff underneath the hood has been improved across the board from its predecessor, and yet despite the shot of steroids, it will be easier on your pockets than it was in the past.

Just what kind of hardware can we find packed underneath the hood? For starters, the new Razer Blade will come with the latest 6th generation Intel Core i7 quad-core processor alongside an NVIDIA GeForce GTX 970M GPU with 6GB of VRAM. Now that is crazy fast, no matter how you look at it – even more for a laptop. Throw in PCIe SSD technology which boasts of up to three times faster speeds than traditional solid-state drives, a Killer Wireless-AC, and 16GB of DDR4 dual-channel RAM, and you’ve got yourself quite a beast here.

Not only that, all of that processing firepower underneath the hood will be translated to visuals, where all Razer Blade models will also arrive with a stunning 3200 x 1800 QHD+ display. The laptop itself will maintain a thin profile of 0.7” thin, but it now tips the scales at a mere 4.25 pounds, which makes it all the more portable than ever before. As for the screen and internals, those will be housed in a CNC-milled aircraft grade aluminum chassis.

The Razer Blade will also hold the distinction of being the second laptop in the world equipped with individually backlit RGB keys, providing millions of color options for the anti-ghosted keyboard. The Razer Blade gaming laptop will retail for $1,999 for the model with a 256 GB PCIe SSD, and if you would prefer to have a whole lot more value for your hard earned cash, then just forking out $200 more will net you the 512GB PCIe SSD model.