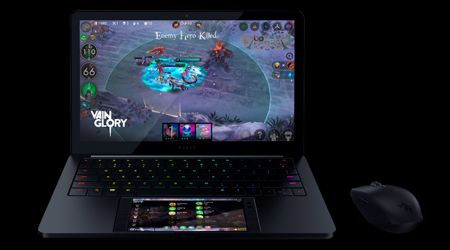 Razer continues its march in delivering top notch gaming hardware such as the Razer Core V2, while breaking new ground in other markets such as the smartphone arena. In a unique combination this time around, Razer has unveiled their latest masterpiece in the form of the Project Linda hybrid laptop. Why is it known as a hybrid laptop? The answer is pretty straightforward and simple: Project Linda arrives in the form of a 13.3-inch laptop design that is powered by the Android-based Razer Phone. This particular smartphone and laptop hybrid concept will hopefully be able to usher in a new era for mobile personal computing, where it brings together the familiar Android environment alongside the ease-of-use of a laptop.

This groundbreaking concept will blur the lines between the smartphone and the laptop, where it will have a space where the regular touchpad is on most laptops, in order to allow you to dock the Razer Phone within its chassis. It will then connect with the press of a button. The Razer Phone is powered by a Qualcomm Snapdragon 835 chipset and accompanied by 8GB of RAM, ensuring that you get to enjoy a responsive performance at all times. Upon docking, it will transform Project Linda into an Android laptop, where the Razer Phone’s 5.7-inch display will double up as a touchpad, or can even be used as a secondary display which can then access apps, tools, and others.

The presence of a full-size, built-in keyboard will ensure that Project Linda’s capabilities are enhanced, delivering enhanced productivity and differentiated gaming experiences. Not only that, users are able to benefit from a responsive and comfortable typing experience which has been specially customized for the Android environment alongside dedicated keys for navigation, search and app selection. It is milled from a unibody CNC aluminum chassis, measuring a mere 0.59-inch thin while remaining under 3 pounds in weight. The 13.3-inch Quad HD touchscreen will extend the 120 Hz experience available on the Razer Phone to a larger display, and has a 53.6 Wh internal battery which is supposedly able to charge the docked phone quickly to full capacity for more than three times.