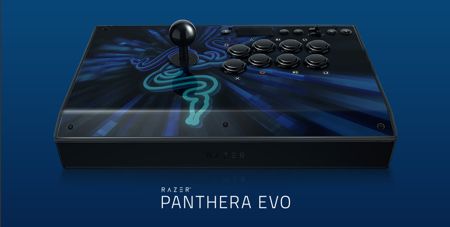 When it comes to gaming peripherals, there are very few names out there that stand out like Razer. Razer has been in the business for so many years, churning out one hit after another, so much so that their gaming hardware have proven to excel time and again with their wireless gaming mice or their gaming keypads. If you do not want to make any excuses that pinpoint the blame solely on your hardware upon conceding victory to your opponent while gaming, then pick a piece of Razer gaming hardware. For those who love the feel of an arcade stick when playing a beat ‘em up or shoot ‘em up as opposed to relying on a gamepad, the next evolution in arcade sticks is here: the Razer Panthera Evo arcade stick.

Razer felt that the fighting game community would need something more formidable in order to enhance their gaming experience, hence coming up with the Razer Panthera Evo that will boast of an improved focus on precision, durability and individuality. During its development, it has been tested by some of the world’s best esports athletes and community standouts in order to gain a nod of approval all round before being released to the masses. In a way, it is somewhat similar to Formula 1 racing technology eventually trickling down to everyday cars. We recommend a comfortable gaming recliner in order to fully enjoy it.

First of all, this new arcade fighting stick will boast of the award-winning Razer Mechanical Switches that offer fantastic response time with minimal interaction, so that your reflexes will not be disappointed each time you would like to pull off a precise combo. It arrives in an improved case design alongside a headphone jack that will help to accentuate gaming performance. In addition, the new Panthera Evo will be fully mod-capable similar to its predecessor, while the artwork on the Panthera Evo will be interchangeable for personal customization as per fan feedback.

Expect the Razer Panthera Evo arcade stick to retail for $199.99 apiece when it is released later this fall.