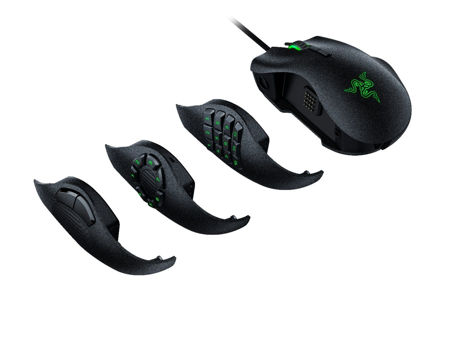 It is safe to say that Razer has a monopoly on gaming peripherals quite unlike anyone else. After all, this is the company that has churned out winner after winner when it comes to gaming hardware, be it the mouse, keyboard or headphones. In fact, Razer has come up with gaming laptops that are right there with the very best of them, and we are glad to bring word that the Razer Naga Trinity gaming mouse has just been announced. This is one customizable mouse that is capable of adapting itself to a slew of games as well as playing styles, making sure that regardless of the game genre or playing style you have, the Razer Naga Trinity will be able to take it all in its stride while offering a way to invoke a higher degree of performance in your gaming.

The Razer Naga Trinity takes pride in being the ninth iteration of the best-selling Razer Naga collection, and this modular mouse will boast of a trio of interchangeable side plates. First of all, you will most probably be familiar with the iconic original 12-button thumb grid of the Razer Naga Chroma that has been specially designed to cater for MMO titles such as World of Warcraft. Alternatively, there is the seven-button thumb wheel of the Razer Naga Hex V2 which is perfect for MOBA and hack-and-slash titles including Heroes of the Storm and Diablo III. Last but not least, there is an all-new two-button configuration that delivers a minimalistic feel, making it ideal for general use. We would dare venture that the Razer Naga Trinity would be a waste when it sees action in an office environment though.

With the 12-button configuration, gamers have access up to 19 programmable keys for customization. It also boasts of an improved sensor compared to its predecessors, featuring a 5G, true 16,000 dots-per-inch (DPI) optical sensor alongside 450 IPS that can deliver faster and more accurate mouse movements. The Razer Naga Trinity will feature an asking price of $99.99 as it becomes available in the first quarter of 2018.