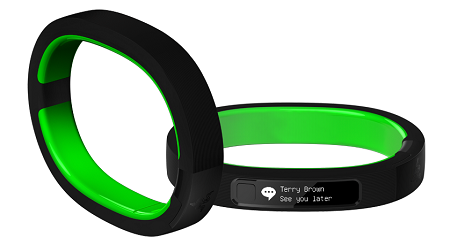 Are you wondering just what to get your favorite nephew this coming Christmas, knowing that he is a geek at heart, and yet would not want something that embarrasses him in front of the rest of his friends? Perhaps a stylish piece of technology might just come in handy, although he does have the latest iPhone already, so is there really anything else that you can purchase? Perhaps – as this coming December 2nd, the Razer Nabu smartband would finally be made available.

The Razer Nabu smartband certainly has its very own pedigree, taking into consideration how it happens to be the winner of “Best of CES 2014”, being the world’s first social wearable which will merge features of smartwatches as well as fitness bands, coming with a $99.99 price tag that would definitely make it highly affordable for just about anyone and everyone.

Ever since the Razer Nabu was announced at CES earlier this year, the Razer Nabu has seen a Beta Program opened to Razer’s most hardcore fans, in addition to a Developer Program getting kickstarted where kits were then sent out to third-party app developers, not to mention Nabu’s integration to Apple’s iOS 8 Health app right out of the box.

In fact, there will be an early batch of 5,000 Nabu units that have been made available to select people for pre-order via Insider, which happens to be Razer’s newly launched community platform that intends to offer some perks to hardcore supporters of Razer products. The Razer Nabu smartband will arrive in a couple of sizes – small-medium and medium-large, where one is able to choose from a quartet of colors, namely green, white, orange and black. Black will be the first color to launch, while the rest of the colors for this water resistant smartband will roll out later. The Razer Nabu comes with a battery life of up to seven days on a full charge, and will play nice with the iPhone 5 and up, and Android 4.3+ smartphones.