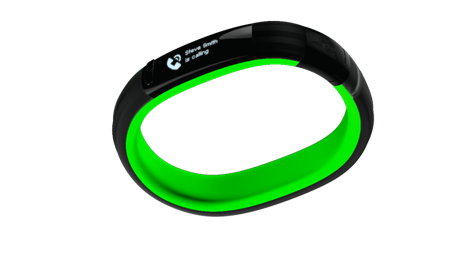 The folks over at Razer do a whole lot more than just churn out top notch gaming peripherals, although that remains their bread and butter. This time around, we have word that Razer has just announced their Nabu SmartBand, where it has already been touted to be the first wearable device in the world that is capable of notifications, life tracking, band-to-band social connectivity as well as gamification. Hmmm, come to think of it, is “gamification” even a legit word? I suppose so. The Razer Nabu is a new revolutionary wearable technology which will be able to send you notifications from a smartphone, and it also has the smarts to track selected personal information. Apart from that, the Razer Nabu SmartBand functions as an open platform where third-party applications are able to exploit in order to create novel experiences for users.

The Razer Nabu will sport a couple of OLED notification displays, where there is a Public Icon Screen and a Private Message Screen. The Public icon screen will be located on the top of the wrist, where you will then be notified of any incoming calls, texts, emails and app updates through notification icons. As for the Private message screen, it will be placed on the inside of the wrist, providing detailed information of texts, emails, bio data and other updates which can only be viewed by the user.

Apart from that, owners of the Razer Nabu will be able to check out the plethora of advanced sensors that can track data so that such information is analyzed later on. The kind of data tracked include location information, bio data feedback (steps walked, distance traveled, stairs climbed, etc.), sleep data, and band-to-band communication among others. Expect the Razer Nabu SmartBand to launch at the end of the first quarter of the year, where it will sport the developer’s price of $49 a pop, although the final retail price to the masses remains to be seen.