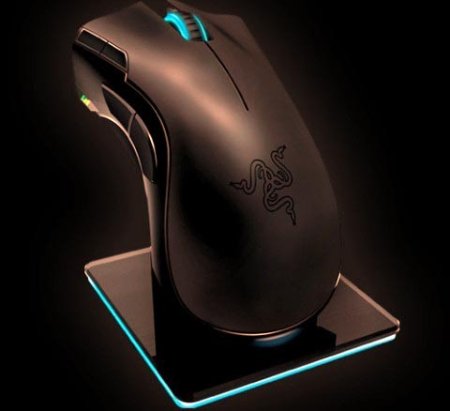 Gamers take their hardware very seriously, so it is no surprise to see a company like Razer thriving on gaming peripherals alone. The recent CES saw Razer release new products, and we’ll take a closer look at the Razer Mamba gaming mouse today.

Razer has unleashed the full potential of gaming mice by designing an ergonomic, lag free gaming mouse with 2.4GHz gaming grade wireless technology, making it the fastest mouse both on and off the cord. With dual mode wired/wireless functionality, the Razer Mamba lets users immediately and seamlessly switch from wired to wireless play. With first in class polling rates at 1ms as compared to traditional wireless mice that poll at 8ms, players will have virtually lag free game play. The Razer Mamba also includes a host of features like Razer Synapse on-board memory that lets gamers store and bring their mouse settings wherever they go. And the world’s fastest 5600DPI Razer Precision 3.5G Laser sensor, the Razer Mamba wireless gaming mouse lets gamers move with lightning speed and precision to easily escape from becoming prey.

How soon will you be able to get your hands on this lethal weapon? Well, it will be put up for sale on Razerzone.com this February, followed by a worldwide release sometime in the first quarter. It will retail for $129.99 in the US, while our friends living in Europe will have to fork out the same amount in the Euro denomination which kinda sucks considering how we’re losing out on the exchange rate.