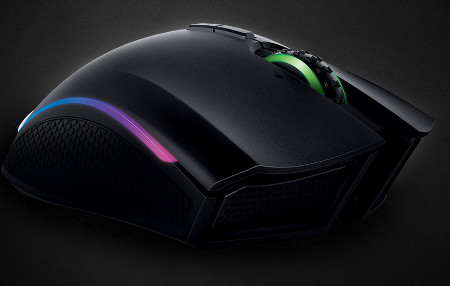 I suppose you can more or less say that Razer has taken to Apple’s naming convention – by offering the same model name, except that it will be known by the current generation model. Sort of like cars, too. The piece of hardware that I am referring to here this time around would be Razer’s Mamba – it is not the first time that this gaming mouse has graced our pages, and it sure as heck does not look as though it is going to be the last, either. The latest generation Razer Mamba is touted to be the most advanced gaming mouse in the world, which is why we are interested in taking a closer look at it right after the jump.

The all new Razer Mamba is said to come with the world’s most precise gaming mouse sensor (meaning no more excuses if you happen to miss the mark in that FPS, or should you lose an important RTS match because you somehow lacked a platoon of soldiers that were hiding in the corner of the screen, and in the speed of your movement, you missed them), accompanied by the revolutionary Adjustable Click Force Technology, and industry leading gaming grade wired/wireless technology.

Sporting an all new 5G laser sensor, this sensor is capable of tracking up to 16,000 DPI which is optimized for multi-display set-ups with ultra-high display resolutions. Apart from that, it claims to be the most precise in the world, too, as it can track up to 1 DPI increments – now how about that? At the moment, the industry standard stands at 50 DPI increments. It can also track lift-off cut-off distance as precise as 0.1 mm, which will do its bit to reduce on-screen jitter in order for your aim to remain on target even as you move. The 5G laser sensor has also been designed to function as an extension of your natural hand movement.

As for the new Adjustable Click Force Technology, you are free to adjust the level of click force required in order to activate the left and right mouse buttons, and it is also capable of up to 504° turn, assuring users have a total of 14 distinct choices to set their signature click feel for a more personalized gameplay. The all new Razer Mamba will retail for $149.99 Stateside, although it will be more expensive across the pond at €179.99.