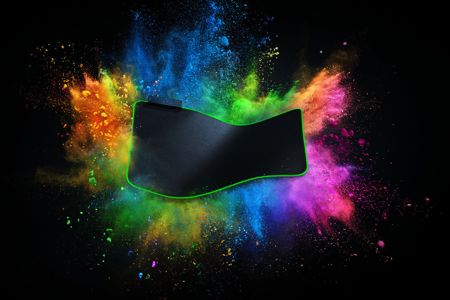 Razer’s foray into the world of gaming peripherals is extremely well known, and the company has long since moved on from simply supplying high quality gaming mice, having extended into gaming headphones, the mouse mat, smartphones, and even a gaming notebook. While many people do overlook the humble mouse mat, it could prove to be a crucial element in your gaming sessions as it provides a stable and consistent feel no matter where you game. If you do not use a gaming mouse mat, different tables have varying surfaces, which could throw your gaming session off balance for some. Razer’s latest Goliathus Chroma is a multi-color LED version of Razer’s bestselling and affordable soft mouse mat, allowing gamers to customize it with up to 16.8 million color options as well as a dazzling array of lighting effects.

It will follow in the footsteps of the Razer Firefly, which is the original RGB mouse mat, and it also makes the Razer Goliathus Chroma the latest device to join the Razer Chroma family. The Razer Goliathus Chroma will boast of pre-set lighting effects including spectrum cycling, breathing and reactive, not to mention user customizable effects each time it synchronizes seamlessly across Chroma-enabled products, courtesy of Razer’s Synapse 3 (Beta) software.

Specially optimized for all kinds of sensitivity settings, sensors and playstyles, the micro-textured cloth used to make up the Razer Goliathus Chroma enables quick precision maneuvers. Of course, during all of your frenetic gaming action, there is a very good chance that an ordinary gaming mouse mat might end up slipping, which is why the Goliathus Chroma comes with a non-slip rubber base that keeps it firmly in place. To sweeten the deal, it will also boast of an integrated cable catch for easy cable management. The Razer Goliathus Chroma and Razer Goliathus Chroma Extended will retail for $39.99 and $59.99, respectively.