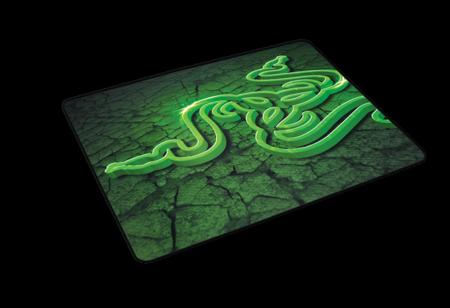 When it comes to gamers, you know for sure that they place an extremely high level of importance on the kind of hardware which grace their gaming rigs. Most of the time, nothing but the very best will do – at least according to their income at that point in time, and most gamers do tend to be loyal to a certain brand of hardware, rarely making a departure for reasons best known to them. Perhaps this is a case where familiarity does not breed contempt, no? Having said that, Razer has been a well known name in the world of gaming accessories and peripherals for a fair number of years already, and they continue to fly their flag high with the latest version of the Razer Goliathus. It is somewhat like the Incredible Hulk, being meaner and greener, although the Hulk is far from slick.

The latest update of the iconic soft mouse mat family now sports brand new artwork thanks to a redesign. You will find that the new gaming surface will further distinguish itself from other gaming mouse mats through the maintenance of its speed-enhancing and control-precise features, ensuring that gamers will be able to enjoy maximum performance at all times so that users can no longer blame the mouse pad for being the cause of their defeat in future matches. Apart from that, this new version boasts of a dense, anti-fraying, long-lasting stitched frame that ensures the surface will remain sharp consistently.

This “Control Edition” of the Goliathus will boast of a heavy weave with micro-textures on the surface, delivering just the right amount of friction where your gaming mouse’s movements are concerned, and FPS fans would relish at the thought of pixel-precise targeting. There is also an anti-slip rubber base to make sure during those intense gaming sessions, it remains well in place. You can choose from small, medium, large and extended sizes for $14.99, $19.99, $24.99 and $34.99, respectively.