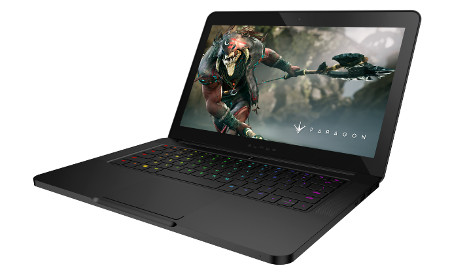 Razer is a name that is synonymous with gaming peripherals, and it goes without saying that their offerings have tended to be on the high end side of things. In fact, their Razer Blade laptop is certainly extravagant in terms of its specifications, but when you are in the business of trying to eke out every single frame rate from your game, all the parts would come in together pretty fine. Well, there has been newer versions of the Razer Blade before, although the name itself has been retained without adding a numeral behind or experiencing a change in model names. Enter the latest iteration of the Razer Blade, where this 14” gaming laptop will bring a perfect balance of power and mobility, allowing you to enjoy your favorite games at maximum settings while you are on the move.

The brand new Razer Blade will be more powerful than ever before, thanks to the inclusion of a next-generation NVIDIA GeForce GTX 1060 graphics processor. Specially designed with the new NVIDIA Pascal architecture, the GPU is up to three times faster compared to its predecessor, sporting a performance increase of more than 40 percent. As a result, one gets to enjoy incredible graphics power so that users can enjoy their games at maximum settings effortlessly while enjoying realistic cinematic experiences with technologies like NVIDIA GameWorks. With so much power in such a small device things can get a little heated. That’s why we recommend to use a proper cooling pad for your laptop, which can really boost performance.

It is also the thinnest design available in its class, as it measures all of just 0.7” thin and tipping the scales at a mere four pounds plus, breaking old conventions in terms of power per cubic inch. It sports a unibody CNC aluminum chassis, which would mean its svelte exterior is also incredibly durable.

Not only that, the new Razer Blade has been optimized for VR performance with low latency and plug-and-play compatibility, being able to support the capture of 360-degree images to view in VR in games that support NVIDIA Ansel technology.

Underneath the hood lies a 6th generation Intel Core i7 quad core processor, 16GB of DDR4 RM, Killer Wireless-AC and Thunderbolt 3 connectivity, a 1TB PCIe SSD option, an anti-ghosting keyboard with Razer Chroma, and a couple of display options to choose from — a Full HD model and a touch-enabled 3200×1800 QHD+ display. Pricing starts from $1799 onward.