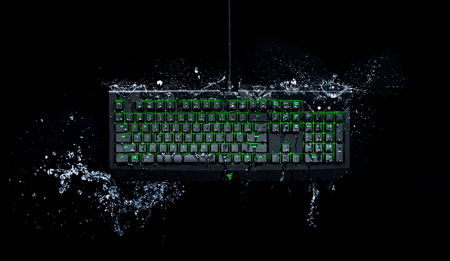 When we think about mechanical gaming keyboards that are of calibre, most of the time we would turn to tried and tested names such as Razer. Razer revives the Blackwidow gaming keyboard by adding in water- and dust-resistant capabilities, hence earning it the moniker of the Razer BlackWidow Ultimate mechanical gaming keyboard. This keyboard that was created specially for gamers have been redesigned in order to be more resilient, boasting of an IP54 rating in order to keep it protected against any kind of accidental water spillage or harmful dust particles.

Of course, gaming can be a difficult task, especially when you spend hours in a marathon session. Hence, it makes perfect sense to have some drinks nearby, but during your frenetic session, you might accidentally knock over that glass containing soda or water all over the place. Normal keyboards would normally be consigned to the rubbish heap after such an accident, but not the Razer BlackWidow Ultimate as it will keep on going.

Expect to be awed by its individually backlit keys, where each green LED can be customized via Razer’s Synapse software. This would result in a wide range of dynamic lighting effects that will comprise of Wave, Ripple, Reactive, and Starlight, among others. Gamers will also gain the ability to create different kinds of lighting profiles courtesy of the advanced lighting effect configurator. In addition, this gaming keyboard is equipped with the Razer Green Switch that has a rated lifespan of up to 80 million keystrokes. In other words, you would most probably still be able to game with this keyboard many years down the road after several hardware upgrade cycles as though it was just unpacked from its box.

The Razer Blackwidow Ultimate mechanical gaming keyboard will come with an asking price of $109.99 and is available worldwide in the final quarter of the year.